I cannot recall any reason why would he spot me in a crowd where I was slowly moving. It is Thursday, market day. A river of people loudly bubbling, unstoppably rinsing the market stands.

As soon as he noticed me, he rushed in urgently, didn’t want me to get away,
I guess, and stopped right in front of me, so I halted unintentionally.

The man first lifted, and then slowly, for a hundredth of a second — faster than a sun when setting — lowered his eyebrows. While watching me so, I thought it was very appropriate to offer him my curious gaze. He smiled. But there was nothing to be added, since I am always smiling.

Neither he asked me anything, nor did I answer him. A moment, long as eternity. Surprisingly, my thoughts streamed smoothly into this unexpected confluence of our encounter. It seemed like we were perfectly understanding each other. Like fish do. Flexing bodies.

I got it, the conversation will not be easy. Troublesome are those who start their sentences with “I.”

“I,” repeated it several times a bit louder, “don’t have trousers!” Carefully,
I looked at him from head to toe, but not too noticeably, because of the crowd. From the top to the waist, a pretty decent old guy. From the waist to the bottom, a very bold combination even for evening outings.

Lacquered shoes, size 9.1 (US 10), and navy blue socks. An absence of trousers, duly reported. Therefore, an old man, without trousers, wearing white pants and a gray jacket, and me.

In the middle of the marketplace, face to face. I felt tightness in my throat. Choked up, unskilfully, I tried to swallow the saliva in my mouth, and with tears in my eyes, I realized that I just swallowed my chewing gum.

“The tribes of Arad and the graves of ancestors, my son, have occupied my mind!”

“You crazy, old man!” It almost left my lips.

“With your archaic speech, as if you were a character in a reader.” It crossed my mind, simply, to rebuke him lightly in my thoughts. However, looking at me even more seriously, he instantly provoked a spark of shame within me. Satisfied that it remained hidden, I allowed him to continue.

“Can you hear the sound of silence?”

Obediently, I tried to hear something and the old man continued.

“In 1887 there was a railway here, and the train rolled late into the night. From the inside, a famous poet, curiously looking into the darkness through the wagon window, to see what kind of city is this.

Whether just to cut time or ease boredom from a long trip, I do not know. The Empire ordered a curfew at that exact time. Nevertheless, from time to time, disobedient residents were sneaking around with lanterns through the darkness, wandering from tavern to tavern. Just like stunned, enamoured fireflies in the night, roaming to and fro, aimlessly from appearances alone.

Perhaps because of a chilly night, mist, or from a draft in the wagon. Who the hell knows!”

The scene seemed spooky. As if he had appeared at the graveyard and watched the procession that revered him while honouring ancestral customs. And then what?

An inspiration gave way to a poetic impulse. The wine had spoken from his innermost, his words got into agreement to exult us in a poem. I knew, up until yesterday, which book and title. He called this place a city of silence, thinking of the quiet in a graveyard. However, gentlemen, it is not a romance, it isn’t. It’s a graveyard!

You drink as if in a graveyard! I am heading over there. My one foot is already in the grave.

Where is the romance in this? Here, I’ve forgotten my trousers.

The people do not know that. Would I come to the marketplace without trousers?

This way, when to the grave, who cares.

She lived on the second floor of our block, her flat was above ours. I was watching, from the perspective of a child, the embodiment of King Kong going through the phases of evolution and finally becoming an old woman. She was a woman of great soul and body, the latter, with its massiveness, making the impression of a stable person. Although she was characterised by her height and broadness, her heart surpassed them both. It was common knowledge. Neighbours, friends, friends of friends, relatives, children, everyone kept coming back to have a bowl of soup, to sweeten themselves up with some cakes or to taste coffee.

I used to be fascinated by the exquisite cleanliness and order in her small kitchen. There was always enough room in this old-fashioned kitchen, even though the washbasin stood nestled on one side, leaning against the oven, the oven against the fridge, a small table placed to the wall, squeezed in kitchen cabinets surrounded by rickety chairs.

That is why we were much closer to each other than we are today. One of the miracles that I remember happened on a late summer afternoon while I was sharing a meal with her grandchildren. That was when goolash turned into goulash. I felt free to ask for another portion.

And then one day, as if it were yesterday, somehow and suddenly she shrank, like your clothes shrink when washed. She was tiny as she came and rang the bell. Traces of being colossal were gone forever, only her heart kept its existing greatness. I understood. My perspective shifted higher, it grew up.. just like that.

Out of the blue.

In the afternoon I was painting on the terrace. Although the artistic adventure did not end, I have managed to displace stains and smears that were crosscut with a variety of lines. It’s all good. Sheltered under a wide roof, I was listening to the silent drizzle of a light rain. In the distance, barely audible, a radio is being heard from the neighbour’s courtyard. Oddly enough, it is not folk music, but classical. Very strange, I thought to myself. He stopped breeding pigs, and the air was filled with freshness of negative ions instead of the stench of the excrement piled up adjacent to the wall separating us. Inevitably, that was a huge loss for the Dadaistic order of thoughts in organizing a painting. I’m trying to degust the taste of the offered peace.

Determined as a soldier, with stained fingers I squeeze the colour tubes. Spelling in my head the English print on labels. Neapolitan yellow and emerald green. They sound like titles.

Without any malice, I demonstrate my mastery of the situation. I’m scoring out this composition of escape from everyday life, yet this beginning is promising, as far as I’m ready to believe in it. I smile, and obliquely stretch my lips. A master of his own, submissive to the painting.

The night is approaching, and there is not enough time. The obligations persistently and inexorably lurk the opportunity, as if they were only waiting for me to get tired and drooped so that they could finally subdue me with their burden.

I know all the tricks.

When they accumulate, I prioritize and eliminate. There is no planning nor organizing. Later I take a bite of the leftovers, not allowing them to get stale, not letting them stay in one place.

Not allowing them to grow roots, that’s important too. The point is in the freshness of the afternoon and in the smell of turpentine. It is massaging my pituitary gland.

Freedom resides only in choice. 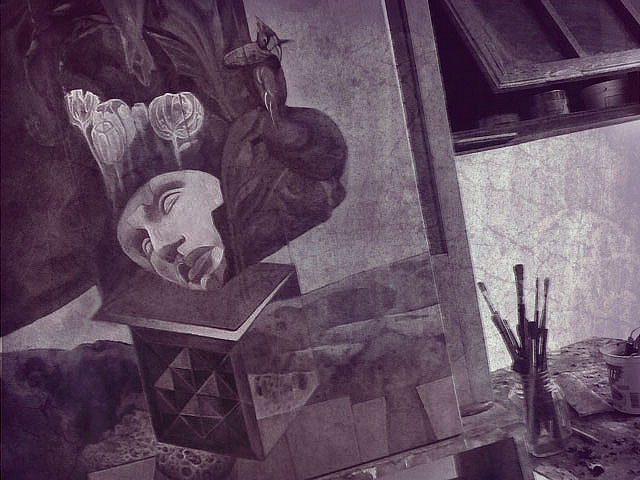